Addressing Population Challenge Is Not Impossible

Reprinted with permission of YaleGlobal Online, published by the MacMillan Center at Yale University.

SOUTH BURLINGTON, VERMONT: Human civilization faces a severe long-range mismatch between sustainable food yields and global population size. Some experts suggest a population sized at approximately two people per arable hectare would be ecologically sustainable. If so, with 1.6 million arable hectares, the planet could support 3.2 billion people in perpetuity. This is less than half the current 7.8 billion.

Moreover, in a business as usual scenario, by the year 2050 United Nation demographers expect 9.7 billion people to call Earth home. Just in terms of food production, this is more than three times the human load considered sustainable. Feeding that many is possible, in the short term, through unsustainable practices, such as reliance on non-renewable energy and fertilizers, pesticides and over-pumping groundwater for irrigation. Warnings to this effect, such as those posed by engineer Bernard Gilland, convey a simple and uncomfortable lesson: that humanity, whose population has already doubled since 1960, finds itself quantifiably between a rock and an ecological hard place.

But human population size and growth are not intractable problems. The factors driving ongoing population increases are understood and amendable. They come from a combination of population momentum, notions of high-desired fertility around the globe, low status of women and girls and bias against contraception. The latter is based primarily on rumors, myths, misinformation and subjugation of women’s preferences.

Fertility rates of more than five children in sub-Saharan Africa are especially indicative of these unjust and troubling dynamics. For example, a study conducted in three African countries found that 62 percent of female respondents in Kenya thought contraceptives could result in deformed babies. More than 55 percent of women surveyed in that country suggested contraceptives could cause cancer. A study in Pakistan found that women are often dissuaded from using contraception because of the belief that fertility is determined by God’s will or that family-planning decisions should be made solely by husbands.

Certainly, it would be hard to overstate men’s roles in idealizing and aspiring to large family sizes. For example, in every country in sub-Saharan Africa, the ideal number of children for men exceeds replacement level fertility. In Nigeria, the average man wants over 7 children. Men in Mali want 8.1 children. A 2017 study indicated that realized male fertility in sub-Saharan Africa was above 8.5 children per man in at least 20 countries. The highest male fertility levels were observed in Niger, at 13.6 children per man; South Sudan, 13.5 children; and Chad, 12.1 children. These figures greatly exceed realized fertility for women in those countries. This is because, on average, men began parenting children at much older ages than women did, when the cohort size of males is much smaller than that of their younger female counterparts. Relatively few potential fathers are available for younger women. Coupled with social norms that sanction polygamy, perpetuate patriarchal control of women’s lives and bodies, and create bias against modern contraception, it is little wonder that of the 2 billion increase in population expected worldwide by 2050, African nations will combine to contribute more than 50 percent.

Yet, it is worth remembering that we are all in this together. “Blaming victims” for our collective ecological predicament – especially disempowered and socially repressed women and girls in Africa – is not merely immoral, it also eludes our most progressive solutions. Make no mistake, working on the population issue in the 21st century largely means working against oppressive cultural practices and social maladies that contribute to high fertility. Wherever women’s social power is inhibited, their self-determination and true choice in how many children to have, and when, is also inhibited.

Our painful, difficult-to-face, sustainability emergency can be overwhelming to contemplate. The world is already deep into ecological overshoot, and the global population is not yet anywhere near to ending its growth, to say nothing of natural decreases. Still, governments, civil society and multilateral agencies should take proactive steps and focus on responsible action. Pleasingly, the drivers of population growth all have known solutions, many of which already deployed on a daily basis. Large and immediate investments towards achieving greater scale should be prioritized. It is true that progressively addressing the drivers of population growth today will not create a sustainably sized human presence on the planet tomorrow, but embracing intergenerational responsibility means opposing laissez faire demographic fatalism.

Thanks in large part to 20th century family planning programs, fertility rates have more than halved from a global average of over five children in the mid-1960s. Looking beyond just the sustainable food production issue, other advances also harken towards a healthier human relationship with Earth. For example, renewable energy production now represents 25 percent of global electricity generation. The rights of nature are finally being recognized in legal systems. The profound dislocations of the Covid-19 pandemic have provided an opportunity for the world to reflect on what constitutes a rewarding, satisfying existence in the company of 7.8 billion fellow humans. 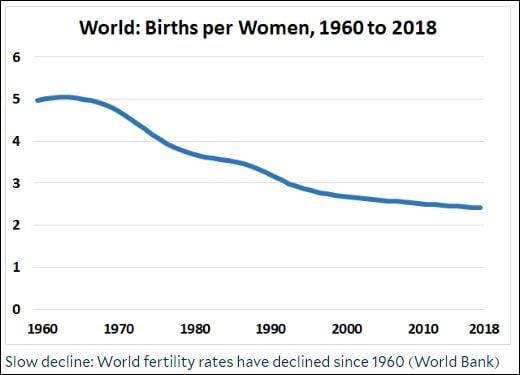 Importantly, when debates on sustainability necessarily include human population dynamics, they should never lend credibility to the idea of coercion. Presenting the population predicament as a binary, where what is deemed necessary – the end of population growth and its natural decrease – can only be achieved by crimes, or coercion, is defeatist and misleading. Most countries that have achieved fertility decreases have done so voluntarily, using human rights approaches.

Iran’s comprehensive national family planning program resulted in a 64 percent decline in the total fertility rate between 1986 and 2000. Thailand’s average number of births per woman dropped precipitously from seven in the 1970s to well below the “replacement-level” of 2.1 in the 1980s. These efforts represent irrefutable evidence that prominent, unembarrassed public discourse and campaigning to affect population trends — in combination with education, women’s emancipation, and family planning information and services, can yield swift, meaningful results.

Interestingly, when the topic of coercion surfaces, most think of abhorrent, anti-natalist, state-sanctioned “population control” policies. It is easy and appropriate to oppose these idiocies, such as the rank tyranny, imposed on 300,000 Peruvians, mostly women, between 1990 and 2000. Former President Alberto Fujimori, imprisoned since 2009 for multiple human rights violations implemented a sterilization program – most of them forced in one way or another – under the guise of a national family planning program.

Yet, government meddling also comes in the pronatalist vein. Goading families to have more children by shaming, misinformation and cash payments is common practice. In 2015, the Minister of Women, Family and Community Development in Malaysia told parliament that falling fertility was why “the ministry encourages couples not to be so focused on quality of life, but to also have children for the long-term benefit of the country.” Then there was the outlandish public relations campaign launched by Denmark in 2014 – “Do it for Denmark!” So-called baby bonus efforts have recently taken place in Singapore, Russia and Australia to name just a few. A more militaristic slant comes from Turkey. Seen from a global ecological perspective, these “pro-growth” schemes are utter madness.

There are long-term solutions to today’s global population growth.

First, population momentum can be mitigated by “sub-replacement fertility,” which 110 countries around the world have already achieved. Japan, Italy, Portugal and Poland – all with fertility rates below 1.5 children per woman – are beyond the effects of population momentum and currently experiencing natural population decreases. None have stopped functioning nor experienced existential disaster. Indeed, they are the vanguard for what eventually will become a global phenomenon. 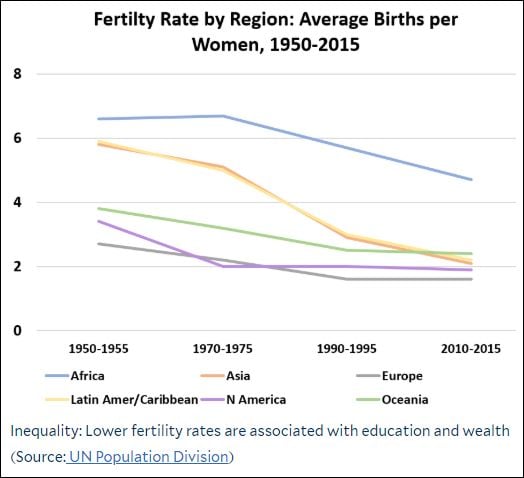 The most critical conditions for sub-replacement fertility to manifest are unrestricted access to, and agency to use, modern contraception. History shows us that most women do not choose to have more than two children once they attain true freedom of choice. Pregnancies can pose health risks for women, especially those over age 35, and the responsibility of caring for young children over many years can interfere with other personal pursuits. Families with fewer children report greater wealth accumulation.

Other major drivers of population growth can be described as either normative or informational. Social norms are the daily habits, unwritten rules and normalized behaviors that everyone in the community accepts, and to a large degree, expects. This applies to higher desired fertility and issues related to the low status of women and girls. Project Drawdown identifies the combination of a girl’s education and family planning as one of the most powerful climate solutions available.

Governments and civil society can easily avail themselves of proven solutions to curtail such normative and informational contributors to population growth. Decades of work in the social and behavior change sciences have shown that engaging people with theory-driven entertainment-education can spark emotive, psychological desires to reject oppressive social norms, while also providing the tools and confidence necessary to pioneer new social norms. For example, researchers and NGOs have credited telenovelas for the reduction in Brazil’s fertility rate from more than six children in 1960 to 1.7 in 2017. Of course, continual assurance of affordable, accessible reproductive health commodities and services must accompany such initiatives. 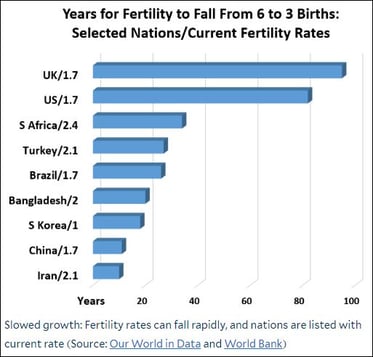 In 2019, the UN Population Division projected that, in a business as usual scenario, global population would top 10.8 billion by the year 2100. Even though the growth rate of population continues its welcome decline due to education, urbanization and utilization of contraception, nominal annual increases remain elevated at around 82 million per year. This is because the lower growth rate acts on an enormous “base” population of almost 8 billion.

Hence, no one should expect the planet to carry a 3.2 billion human population load in our lifetimes — but we should also do all within our power to avoid the 10.8 billion scenario. We can take steps to ensure future generations are no longer growing and, indeed, are moving towards a better equilibrium with the planet. Educating citizens about the ecological predicament of a global population that has more than doubled since the 1960s is an essential exercise. But the outcome cannot be to create hopelessness around efforts towards bona fide sustainability. Concerned citizens must embrace the power of positive thinking and agitate for a sea change in global efforts towards sustainable agriculture, sustainable population, the stemming of climate change and other environmental threats.