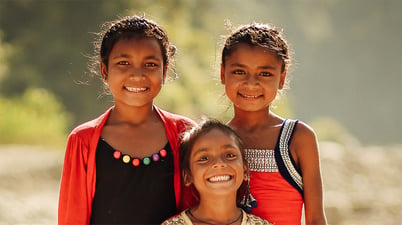 In June, The New York Times released an article broadly examining child marriage in Nepal. To gather information, reporters Bhadra Sharma and Kai Schultz interviewed children who had been recently married, government officials, and public activists working against child marriage. The article explored public opinion, a number of contributing factors to the practice, and the effectiveness of efforts to curb Nepal’s high child marriage rates.

Rajan Parajuli, Resident Representative of Population Media Center’s (PMC) Nepal team, has spent years working with PMC to create social change around diverse issues faced by Nepalese people, including gender equality, access to education, and child marriage. We sought his insight into some of the topics discussed in the article, and the future he sees for addressing child marriage across Nepal.

PMC: Are there any specific approaches the government or activists have taken that have been effective at lowering rates of child marriage across any cities or regions of Nepal?

Parajuli: Nepal’s government developed a national strategy in 2016 with an aim to end child marriage by 2030. The minimum age limit for both boys and girls to be married has been set to 20 years old. Violators of that age bar can be sentenced to 3 years in prison; it could include parents, and the bride or groom if they are 18 or older. In collaboration with UN agencies and bilateral donors, the government has also introduced various life skill and alternative education packages for girls who drop out of school or are the victims of child marriage.

Province 2 in southeastern Nepal has been found as the most critical zone for child marriage, girls’ education, and gender-based violence. In early 2019, the Provincial Government declared a campaign ‘Beti Bachao, Beti Padhao’, which means ‘Save Daughter, Educate Daughter’. The campaign involves providing insurance packages to the girls after they get their citizenship certificates at the age of 16. The local municipality responsible for vital statistics has to recommend issuance of the insurance package for around $1,200 USD; this recommendation is provided when the parents can confirm that their daughters have not been married and have completed schooling requirements. This is an ambitious but progressive move of the Government which is expected to have greater results in that province. The Provincial Government has also planned to distribute bicycles to help the girls go to school, and also provide other incentive packages for the parents to send their girls to school.

Both in Province 2 and countrywide, the enrolment rate of girls in school has significantly improved in the last decade. The dropout rate of girls from the primary level has reduced in recent years.

PMC: What do Nepalese citizens think about public officials who vocally oppose child marriage while still having their children married?

Parajuli: I was also surprised to see this quote in the article, but it cannot be generalized. In a country where 40 percent of people are married before the age of 18, we will definitely find a lot of people in the Government who were married during their childhood. Since the rate of elopement has increased in the last few years, cases of children who have eloped from the families of Government officials can be found, which the article may be taking into account.

PMC: Regarding the quote from the article, “Activists have organized along Nepal’s border with India to intercept young brides at risk of being trafficked into prostitution”, can you speak more to that problem?

Parajuli: The trafficking of young girls to India is still a big problem in our country. They are sold to brothels in India or are taken to different parts of the world and sold into the entertainment industry, like nightclubs or illegal restaurants.

In many parts of our own country, the girls are suppressed and their fate is decided by someone else. That could be their husband, parents, and communities. Their right to education is not ensured. They are not treated equally at home. Their voices are not heard, and they are not provided opportunities to make decisions for their lives. All these factors put them in vulnerable positions and traffickers target such girls who have a big dream but have a poor family background.

PMC: Do you think that Nepal’s goal of eradicating child marriage by 2030 is currently achievable?

Parajuli: First of all, I believe 2030 is a very far-off target. It’s a very pressing issue and we need to put in an effort to end it soon rather than having a deadline that far. Why can’t we save the adolescent generation of 2020 instead of hoping that the new generation of 2030 won’t practice child marriage? Too much effort has been made to criminalize child marriage and to make Government institutions accountable to stop it. I believe if we really want to change the situation, then we need to motivate the younger generations to delay their marriages and continue their educations. We need to convince parents that sending girls to schools has benefits over marrying them off at an early age. Marriage is very much a social phenomenon, and it’s always easy to make an impact on people’s behavior if we deal with it like a social problem rather than trying to handle it legally.  We may need to work at both levels, but the priority needs to be given to educating, motivating, and inspiring people rather than envisioning a situation where people will be put in prison for marrying early.

I was reading a news story where a community organized a protest rally to drop down the age bar for marriage because they felt it's not practical and that it’s against their culture. A parliamentarian said that the 20 year age bar is too high for our country. Now people are questioning about why the age bar is at 20? That age seems too old to them. We need to enhance this dialogue and conversation further so that people find the age bar rational. We need people to be self-motivated to make a good choice for themselves as an adolescent or make a good choice for their children as parents - rather than making a decision out of fear.

Rajan Parajuli is the Resident Representative of Population Media Center's Nepal team. He is a prominent journalist, media trainer, and communication activist in Nepal.