#ClimateStrikes: A Movement Against Collapse that Calls Out All of Us 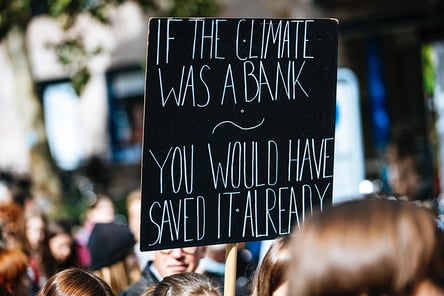 “You have stolen my dreams and my childhood with your empty words,” she stated at the U.N.’s 2019 Climate Action Summit as part of a speech where she tore down the absurdly insufficient goals that have been decided upon – and those not even acted upon.

On September 20th, students around the world decided to show that they are here, they are watching, and they are doing. The decided to tell older generations that this is unacceptable. They have been left with no choice but to take charge themselves. But they shouldn’t have to.

Only the kids aren’t buying it.

Greta’s outrage at “business as usual” and the evil of knowing and not acting is not to be dismissed. But shirking responsibility is only the beginning of the trespasses against our youth.

“This is all wrong. I shouldn't be up here. I should be back in school on the other side of the ocean. Yet you all come to us young people for hope. How dare you!”

Greta’s message is clear: Don’t destroy my garden – tearing and ripping out seeds and roots for your profit and power – and then praise me to all my neighbors, sharing how hopeful you are that I’ll be able to nurture a sufficient harvest from the tattered pieces with nothing but my own sacrifice and hard work. Stop prioritizing profit and power. Stop tearing up gardens. Plant your own garden; create your own hope. Do something to make yourself and others hopeful. But what is helpful? What do we do?

Chances are, if you’re like me, you’re unsure about what to do. We know the common talking points: recycle, drive less, don’t fly, don’t eat meat…and we also know that this is like holding a measuring cup in front of a tidal wave and hoping to stop it. 71% of carbon emissions come from 100 companies. Where’s the accountability? Our individual choices to avoid plastic straws are important, but my impact, even our collective impact, will never be enough. So what do we do?

What is crystal clear is that Greta and the 4 million people striking on September 20th, the largest climate strikes in world history, are right. As I stood on that Friday among mostly the young and listened to young speakers, I felt the weight of the forces they were fighting. It’s an upstream swim that we discuss at PMC continuously – social norms. They, we, are fighting against constructs that people follow – follow even though they often aren’t even aware these social constructs are guiding their decisions and actions. I looked around at these powerful youth grasping their strength and realized the tools for action have, as always, been intentionally hidden.

The intentional washing of history to remove protests and pedagogies and systems that don’t conform to those we see today is remarkable. Man-made systems are not pillars for existence – we’re confusing those with natural systems. The systems people have created can always be changed and have been changed – recently – providing different social, economic, political, and other models throughout times, people, and places.

It’s time to stop being obsessed with who is going to save us. An anointed superhero who will work within the confines of systematic oppression and consumption so that everything continues to function as we understand it (minus the bad parts) is never going to happen. Greta is taking the lead in destroying this system of business-as-usual, but even she won’t save us. We appoint leaders and celebrities and we hand power over to them because we’ve been taught to believe and accept that power comes from somewhere outside ourselves. We’ve been taught stories of individualism in order to keep us as individuals.

Greta doesn’t want to lead this movement, so let’s make sure that she doesn’t have to. Let’s lead this movement together. Let’s take turns and let’s grow and storm. If, like me, you’re not sure where to start, I’d recommend we begin by thinking about what makes politicians and corporations uncomfortable. The imminent collapse of humanity and biological diversity is not one of those things. But they don’t like it when we get together with other people. Politicians and corporations care about numbers. Let’s give them numbers like they’ve never seen before.

Progress has never been handed over. The Amazon is burning. The children are marching. What are we doing?