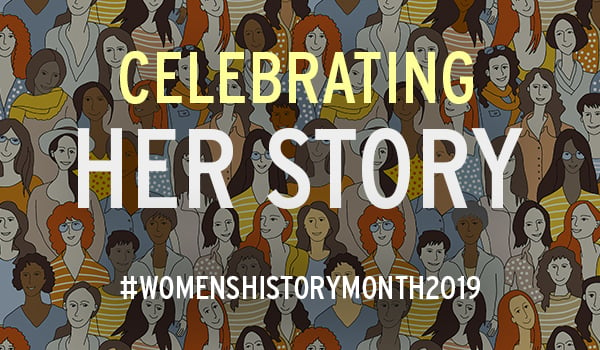 It was the start of eighth grade. I sat in a row of the uncomfortable chairs and desks, just like everyone else. When my history teacher asked, “Does anyone notice anything peculiar about the word ‘history’?” there were a few murmurs and guesses, shifting in seats as we looked around the room to see if anyone else had any answers. He wrote “his story” on the board.

Suddenly, every story you hear, every textbook you open, every collection of historical events…you wonder…who’s story is this? Stories are naturally, and importantly, influenced by the person telling them. None of us remember every detail, every perspective. Our brains key in on particular components, consciously or unconsciously blocking others.

For one month out of each year, the U.S. President declares it “Women’s History Month.” Of course, in many cases this means looking at the story of a woman – as portrayed by a man. There’s inherent value in this, of course, but we also need to be asking, “what is her story?” History written and recorded or passed down by women is different – it’s #HerStory, and it impacts today and tomorrow.

Sneha Jha spent her early childhood in the Mahottari district of Nepal and grew up in Kathmandu. Her mother instilled in her unusual ideas: she didn’t have to marry young and her studies were important.

“I was only 15 when I appeared for my SLC (School Leaving Certificate) exams,” says Sneha, “and from around that time, people had started approaching my family with marriage proposals [for me]. But in my case it was different. In that regard, I consider myself a lucky person. My mother was against my marrying early.”

Today Sneha works for PMC. She’s a writer. Her personal story is deeply connected to stories she writes in Hilkor, writing to end early marriage in Nepal. Hilkor (“Ripples in the Water”) is a 104-episode radio show that aired from April 2016 to April 2017 (and rebroadcasted from April 2017-April 2018) in the Maithili language on over 10 local radio stations including national broadcasters throughout Nepal. An exposure to #HerStory that documents a reality of the past and hopes to change the realities of the future.

Imagine being 15 and having people come to your home with marriage proposals. Some even asked for no dowry, a benefit many parents would not have dismissed. In Sneha’s case, her parents turned down every suitor, including the marriage proposals from very wealthy families. The priority was her studies. Though many see her as a positive role model, Sneha believes the real credit for her decisions not to marry young goes to her mother.

The precarious and emotional situations Sneha found herself in as a young teen facing marriage proposals, with no control over the situations, inspire her fictional characters and storylines with authentic emotions, interactions, and character development.

“These characters share certain feelings and experiences with me as a student who was approached for marriage while still studying,” says Sneha. “In the story, I have captured all the emotions that I used to have as a teenager and also those of the boys who were my friends and who had feelings for me.”

One of Sneha’s largest concerns, and something that frequently comes through her writing in the Hilkor drama, was her emphatic belief in the importance of not being dependent on a man.

#HerStory helps us understand ourselves, our past, and our future. Sneha's helping to make #HerStory within reach of more Nepali girls and young women. It's only by featuring #HerStory that we will find our way to where we want to be.

Below are the voices of a tiny selection of women. If you have books or quotes from women that you find particularly meaningful – contributing to our understanding of our world, ourselves, our past, and our future – please send them. We all need women’s voices to help us see more clearly. We need their perspectives, their genius, their analysis, their strength, and their inspiration.

A SMALL COLLECTION OF QUOTES:

“The caste system, in all its various forms, is always based on identifiable physical characteristics – sex, color, age”
- Roxanne Dunbar-Ortiz, Historian and Activist

“Each time a woman stands up for herself, without knowing it possibly, without claiming it, she stands up for all women.”
- Maya Angelou, Poet, Author, and Civil Rights Activist

“The more clearly we can focus our attention on the wonders and realities of the universe about us, the less taste we shall have for destruction.”
- Rachel Carson, Marine Biologist, Writer, Conservationist

“If particular care and attention is not paid to the ladies, we are determined to foment a rebellion, and we will not hold ourselves bound by any laws in which we have no voice, or representation.”
- Abigail Adams, First Lady, Presidential Advisor, Writer

“Just don’t give up trying to do what you really want to do. Where there is love and inspiration, I don’t think you can go wrong.”
- Ella Fitzgerald, Singer

“I got my start by giving myself a start.”
- Madam C. J. Walker, Entrepreneur, Philanthropist, Activist

“I want to do it because I want to do it. Women must try to do things as men have tried. When they fail their failure must be but a challenge to others.”
- Amelia Earhart, Aviation Pioneer, Author

“Fight for the things that you care about. But do it in a way that will lead others to join you.”
- Ruth Bader Ginsburg, Justice of the Supreme Court of the United States

“Extremists have shown what frightens them the most. A girl with a book.”
- Malala, Activist