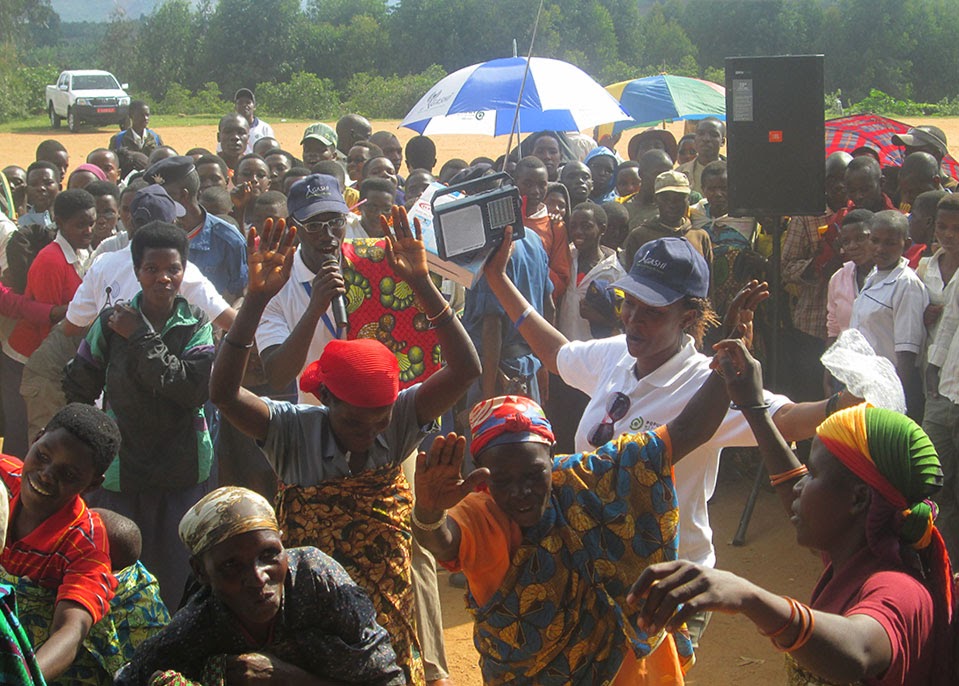 If a megaphone were to broadcast an important message around the world, do you think it would instantly change people’s behavior for good? Not likely. Standalone PSAs such as “Don’t litter” or “Don’t do drugs” are less likely to resonate than if those messages were placed in a relatable context and weren’t telling people what to do..

When well-intentioned messaging comes up against deeply seated cultural norms, the information often falls on deaf ears. Listeners may even get defensive about what they perceive as disparagement of their lifestyle or choices. Positive messaging also faces the hurdle of information overload. People around the world are inundated with content from a variety of sources, so it takes something special to grab people’s attention. That’s why well-crafted educational entertainment is such a powerful tool for generating positive behavior change.

Everyone craves quality entertainment. We love to get lost in other people’s drama, even if those people are fictional. And when the characters in a story are combatting similar issues to our own, we have a chance to learn from their mistakes without suffering the repercussions ourselves. Educational entertainment has proven effective with diverse groups of people, ranging from rural Burundian women who hold misconceptions about contraception to urban Haitians who enable child labor practices. Successful programs have helped change behaviors toward condom use, deforestation, drug and alcohol abuse, illegal poaching, and many other complex issues.

So how can something as innocuous as a television series or radio drama create measurable change in all of these different contexts? Let’s take a look at the methods that make social impact entertainment effective.

Meet People Where They Live

Effective social impact entertainment resonates with the audience by incorporating relevant cultural references and regional issues. The actors, writers, and producers should ideally be part of the culture the show is depicting to ensure the characters are realistic and every detail is on point. Shows must celebrate the strengths of communities as well as address challenges. Programs should be broadcast in the native language and the most popular medium of the primary audience, whether that’s radio, television, or the internet.

Behavior change theory can be very useful in explaining why educational entertainment works. Here are a few theories and tactics leveraged by our producers to inspire change.

Albert Bandura’s social learning theory helps explain the impact of role modeling on behavior change for good (or bad). According to his theory, most human behavior is learned observationally through modeling. We watch how those around us perform and then we use that information to guide our own actions. By learning from the mistakes and successes of others, we effectively take shortcuts to achievement and avoid the repercussions of blunders.

When combined with Bandura’s social learning theory, Horton and Wohl’s concept of parasocial interaction helps explain why fictional characters can have such a large impact on audience behavior. Horton and Wohl found that the relationship between audience members and media personalities or characters is emotionally analogous to real-world interpersonal relationships. Because our relationships with characters mimic real life, we’re emotionally invested in the characters’ decisions and outcomes, which amplifies our learning-by-watching.

An Example from Rwanda

Our Rwandan radio show, Impano n'Impamba (“A Gift for Today That Will Last a Long Time”), included one storyline centered around a character named Ketia, a 17-year-old girl who attended a prestigious school for wealthy families. Ketia begins experimenting with alcohol and having unprotected sex with her boyfriend Rukuba. After a series of trials and tribulations, including failing her national school examination and contracting gonorrhea, Ketia finds ways to make changes, even though it’s not always easy or clear-cut. Ketia acts as a role model for the listening audience by illustrating things like the importance of condoms and how one might negotiate condom use with a partner.

People will only change when they believe it’s within their power — and that they won’t be ostracized as a result. Educational entertainment can help people realize change is possible by showing them their options, walking them through the process in the form of a hero’s journey, and normalizing the experiences. It can also prepare them for the very real obstacles they’re likely to face when they make changes and challenge social norms.

Keep People Coming Back for More

All this sounds great, but it goes without saying that educational entertainment needs to be entertaining. It should feature the hallmarks of great episodic storytelling, such as captivating characters, cliffhangers, interwoven storylines, and unexpected plot twists. Key characters eventually do make healthy choices, but they absolutely cannot be boring, one-dimensional, or predictable. The captivating nature of the story is also essential to keep audiences coming back for more episodes over a period of time to allow characters, and hopefully audience members, to shift their attitudes and behaviors at a reasonable pace.

The use of many episodes with dramatic cliffhangers is also more likely to get audience members talking after each new episode airs, which encourages the discussion of taboo topics that might otherwise be avoided. Episodic storytelling gives audience members the chance to talk with friends and family about the choices different characters made and what they hope will happen next — which seems straightforward (we all do it!) but in the case of PMC’s entertainment, this discussion is actually an analysis of character choices and social constructs among peer groups.

See How You Can Make an Impact

At Population Media Center (PMC), we combine these and other social and behavior change theories with compelling storytelling to address deeply embedded, personal and social issues in a variety of cultures around the world at a low cost. We have completed and are currently broadcasting more than 50 shows in more than 30 languages, helping more than 500 million people live healthier lives in more than 50 countries. See how you can help us make an impact today.