How PMC Shows Guide Audiences Through the Stages of Change 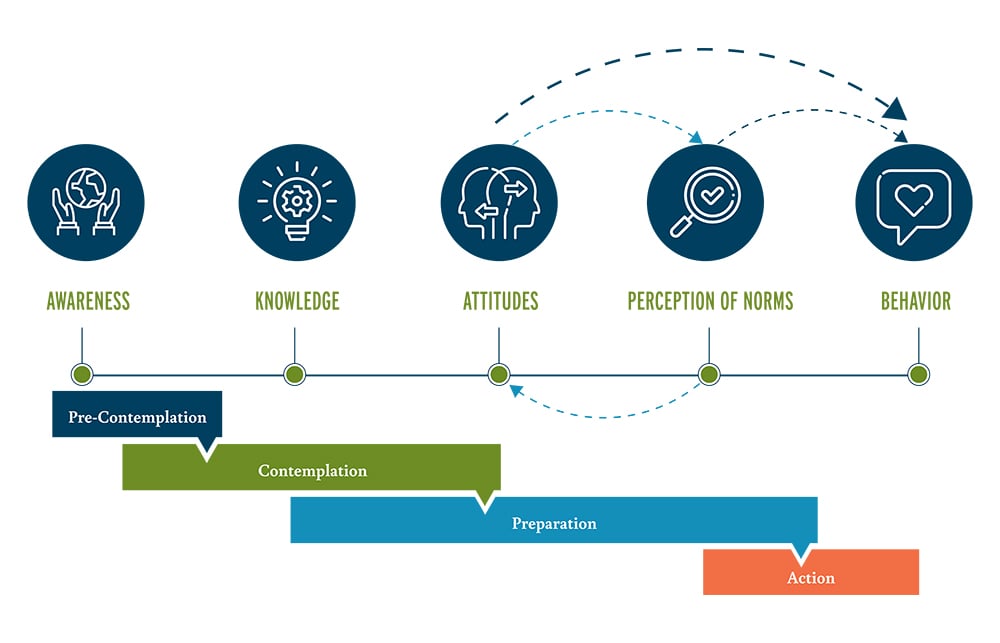 At Population Media Center, we work on complex issues that cannot be solved overnight. As opposed to more tangible concerns, like feeding the hungry or building schools, changing perceptions and behaviors requires a nuanced approach that can take months or even years to properly execute.

In many areas of the world, deep-seated cultural norms threaten the rights of women, endanger the environment, and keep individuals, communities, and entire nations from achieving their full potential. However, these norms are often interwoven with complex belief systems and senses of self, so if someone were to come in and abruptly challenge those norms, individuals would likely ignore them or lash out in self-defense. That is why we follow and adapt the commonly used Stages of Change, which allows for the adoption of change over time.

At PMC, we use frameworks such as Stages of Change, which argues that shifts in regular behavior require people to move through various stages. In other words, nobody immediately jumps into new behavior without going through a process that leads them to that decision.

The Stages of Change

The Stages of Change can be broken down into various degrees of specificity, but it is generally understood that the stages include:

PMC’s model of the Stages of Change: 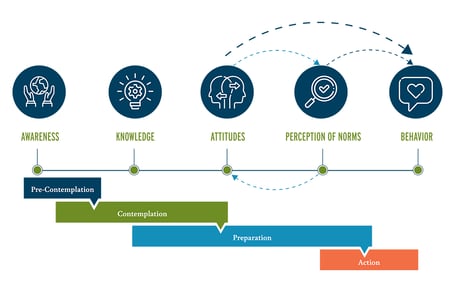 PMC shows and media campaigns are created with these Stages of Change in mind—our goal is to guide audiences through each stage with episodic entertainment. In order to achieve this goal, we must understand the audience and where they currently fall on the path to change. If someone is in the precontemplation stage, PMC cannot immediately begin role modeling a different behavior without introducing information about WHAT that behavior is, WHY one would do it, and HOW they would go about doing it.

For example, if a husband and wife have no idea there are options to avoid pregnancy (as was the case in this story), then they are not looking to implement family planning methods (even though they cannot afford to feed their six children on a brickmaker’s pay). They are not ready to change behavior because it doesn’t even occur to them as a possibility.

As an audience becomes aware that there are ways to have sex and also prevent pregnancy, they suddenly move into a knowledge-seeking space. Motivated by their desire to stop having children, they can now ask: How is it possible to prevent pregnancy? At this point, the show uses relatable characters to explore information about reproductive health and contraceptive options.

Once listeners have traveled through the contemplation stage, they enter the preparation stage, which can often be the longest and most difficult. It is during this stage that people assess how hard the change will be, what they will have to do, what the pros and cons are, and what other people will think of them for making this change. Behavior change—especially when it comes to the very personal and deeply entrenched issues that PMC works on—may require a lot of preparation.

Once through the preparation, people can then attempt the change. It is very possible that individuals will succeed in making a change, only to relapse down the line. For example, someone may start using condoms, then neglect to wear one on one occasion, before deciding to continue with regular use. Or perhaps a husband has started having conversations with his wife and making decisions as a couple, but then one night he gets angry and makes a unilateral decision. He might then decide to apologize and return to a more equal partnership going forward.

It is easy for anyone to slip as they move through the Stages of Change, which is why our shows consistently provide examples of behavior change maintenance. Characters in our shows will model successful change, and then sometimes fall back into their old patterns, so audiences understand that maintenance can be tricky and failing doesn’t mean you can’t return to healthier behavior. PMC shows also demonstrate the difficult conversations characters must have to maintain their behavior change, because it is likely that the audience will have to navigate these as well. This gives the audience a chance to watch and learn how the characters frame conversations or handle conflict as they negotiate change.

The transtheoretical Stages of Change are an important tool for PMC. Once we know what stage our audience is in with each issue addressed in our show, we can make better choices in creating compelling storylines and characters, and have a better sense of how far the show might be able to move audiences on an issue. It is often not possible to go from precontemplation to action in one show, even though our shows can run for one or two years. We know that challenging social norms and achieving positive behavior change takes time and will likely require numerous shows, which is why we commit to working in places for many years.

When interventions are intentionally and strategically designed to meet the audience where they are, measurable behavior change is possible. Discover how our show Vencer el Miedo (“Overcome the Fear”) addressed teenage pregnancy across Mexico in our most recent case study.