On World Wildlife Day, Stand Against the Tide 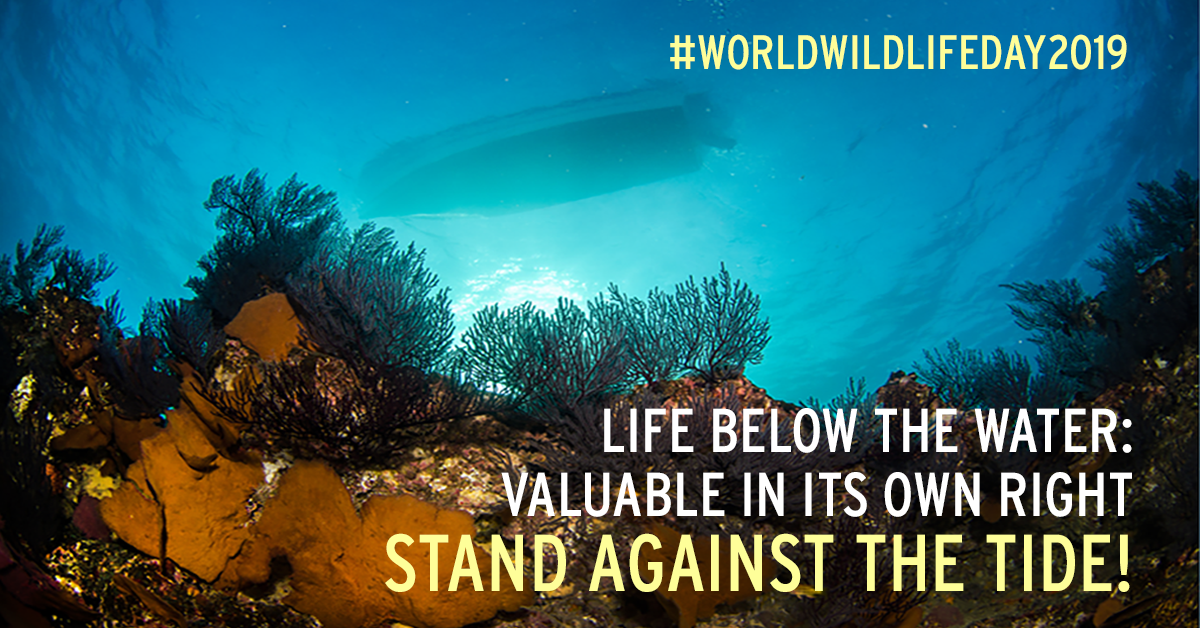 “Life Below the Water” - ITs worth more than just what humans need it for.

Is it a good thing that there is a designated UN Day for Wildlife – a.k.a. World Wildlife Day?

Probably, on balance, yes. In the big picture, increased appreciation of the world’s wildlife is preferable to a lack of awareness – or, at least, it is better than a total absence of effort. Even a largely symbolic event (as many UN designated days are), seems preferable to the slow, un-examined drip-drip-drip of the tragic status quo.

Let us not sugar-coat this: Earth’s oceans are being dramatically heated and acidified. Their ecosystems are being forced into collapse. Humans practice gross over-exploitation of the planet's aquatic resources on a daily basis.  Estuaries and coastal waters are suffering from eutrophication. The list goes on.

Therefore, we approach this year’s UN-designated World Wildlife Day theme, “Life below water: for people and planet,” with a mix of appreciation and skepticism. Eileen Crist’s definition of Life (with a capital L) helps frame our concerns:

I use the word Life, with capital L, to mean something akin to what life scientists call “biodiversity,” though the term is often mistakenly conflated with numbers of species. While numbers of species are a significant dimension of Life’s fecundity, Life is far greater than that. Life is bewildering in its creative expressions, its beauty, strangeness, and unexpectedness; its variety of physical types and kinds of awareness; its dynamic, burgeoning, interweaving world-making. In the “interdisciplinary” dance of Life—where phenomena of physics, biology, biochemistry, behavior, awareness, and chaos jostle in established and spontaneous patterns—Life creates abundance.

This definition of Life makes clear that life is profound and valuable beyond what it means for human utility. So, we are glad that the United Nation’s description of World Wildlife Day includes seeing the day as raising awareness about “the breathtaking diversity of marine life.” But we turn skeptical when, in the same breath, the UN notes the crucial importance of marine species to human development, and “how we can make sure it [the breathtaking diversity of marine life] will continue to provide services for future generations.”

Here is where it is important to think about the quality of the awareness being generated on World Wildlife Day. There is nothing wrong with acknowledging and accepting that humans rely heavily on the Life below the water. But, at a scale of 7.6 billion people, the human project does more than “rely heavily” on the seas. We are, at such an enormous size, totally dependent on Life below the water.

Abdoulaye Mar Dieye, UN Assistant Secretary General and Director of UNDP’s Bureau for Policy and Programme notes, “Oceans regulate our climate, produce half the oxygen we breathe, provide nourishment for 3+ billion people, and absorb 30% of carbon dioxide released into the atmosphere and fully 90% of the heat from climate change.”

If all World Wildlife Day communicates to popular consciousness is that humans should conserve Life under the water because we are dependent on the continued over-exploitation of that Life – then it is a communications failure.

Please help us make sure this does not happen. Please share the post-card below.