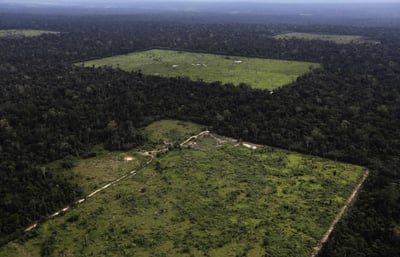 This article was originally published November 21, 2018.

In July of 2016, the Washington Post printed an article on a global biodiversity assessment published in Science that same month. The study was titled "Has land use pushed terrestrial biodiversity beyond the planetary boundary? A global assessment."

The authors of the study used nearly 2 million data-points for nearly 40,000 terrestrial species. They found that across 65% of the global terrestrial surface, land use and related pressures from human beings have caused biotic intactness to decline beyond 10%, which they considered as the safe planetary boundary and which should not have been crossed. Changes have been most pronounced in grassland biomes and biodiversity hotspots.

The Post notes that, "The reason is not exactly a surprise — from grasslands to tropical forests, humans are using more and more land for agriculture, to live on, to build roads and infrastructure upon. When we take over, we clear the land or otherwise convert it for our purposes. This doesn’t always cause extinctions, but it does reduce the abundance of species and what researchers call the “intactness” of ecosystems — and when biodiversity levels fall too low, it can mean that larger ecosystems lose their resilience or even, at the extreme, cease to function."

It is worth noting that the 10% threshold was selected on the basis of the precautionary principle. Unfortunately, the author of the Post article somehow manages to turn up Erle "Overpopulation is Not the Problem" Ellis, and -- unsurprisingly -- Ellis seems to pooh-pooh the idea that a 10% decline in biodiversity would necessarily be a problem. One thing is nearly certain however -- with net human population growth of 1.5 million every 7 days, biodiversity "intactness" won't be getting better anytime soon.