The Forgotten Women of the Suffrage Movement 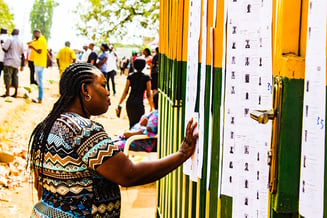 The 19th Amendment to the U.S. Constitution was certified on August 26, 1920. This amendment states that the right of U.S. citizens to vote shall not be denied or abridged on account of sex.  It was a day that has been commemorated for granting men and women equal voting rights, and in 1971 the U.S. Congress christened it Women’s Equality Day.

A satisfying proclamation. And not entirely true.

It’s important to note the use of the word citizens in the 19th Amendment. While today we might assume its design is to limit interference in elections, at the time it was able to be applied on a very insidious technicality; Native Americans were not declared citizens of the U.S. until 1924, and some still were unable to vote until 1957. Asian-Americans were restricted from becoming citizens and voting until passage of the McCarran-Walter Act in 1952.

Similar fine print can be seen in the suffrage histories of other countries with significant white populations. While all white Canadian women achieved the right to vote in 1918, Asian-Canadian women and First Nation women did not until the 1940s-1960s. Full suffrage passed for non-indigenous Australian women in 1902; the federal right to vote did not pass for indigenous Australians—both men and women—until 1962.

Women’s Equality Day, and its cross-national counterparts, should be celebrated. But they should not be seen as the day the fight for suffrage was over. For many women of color, it was only the first hurdle; and for many women globally, the battle has only just begun.

Kyle Bodge is a Marketing Associate at Population Media Center. He holds a Bachelor of Science in Health Sciences from the University of Vermont.